I received (what I will from now on refer to as ‘The Phone Call’) at 9:56pm CST. I was on the phone with my kids at the time and decided to take the call (momentarily) to see what the guy wanted. We had been talking recently about the Comics In Action website and how I wanted to take the site over to a WordPress driven site, rather than use Dreamweaver and Photoshop to assemble everything.

I told my son, Jared, to wait a second and clicked over to the other line. We said our respective, –Hey, dude, what up’s– when the caller asked, “Have you heard the news?” I replied, “What news.”, rather hesitant as to what the response would be. “It’s 100 percent sure. We’re moving back to Iowa.” I almost dropped my RAZR and shouted at the moon, “There IS A GOD!”

If you haven’t guessed, my good friend, Chris Hanel, is returning to Iowa. To be perfectly honest, I don’t know exactly why this is so important. It’s not like Chris and I have had some kind of long standing friendship that has surpassed the ages. I’ve only hung-out with the guy less than a dozen times. So, why did this news make me as giddy as a school-boy? We have a mutual project, Comics In Action, that has tied us together in a way that is beyond odd.

Comics In Action was borne out of a mutual feeling that a local improvisational comedy troupe was necessary here in the Cedar Rapids / Iowa City area. The concept started from Chris’s idea, which was expounded upon by fellow-collaborator, Abraham Peterka. Chris and Abe had been working with a mutual friend, Stephen L. Phelan, on a Star Wars Fan Film, “The Formula“. The near-feature-length film had received some critical acclaim within the Star Wars community and garnered them well-deserved ‘street cred’ among Fan Film makers in general.

No sooner had Chris and Abe held auditions for their ‘MIB meets FBI’ improvisational comedy troupe, when Chris decided to attend the DAVE school (short for ‘Digital Animation & Visual Effects’) and move to Florida. From there, Abe was left to assemble the rest of the comedy troupe. Comics In Action became a minor hit within Eastern Iowa, amassing fans from Des Moines to the Quad-Cities.

Chris was at the initial improv auditions and MAYBE one rehearsal (if my memory serves me correctly) and then I didn’t see him for a couple years. He came back to Iowa for family get-togethers and he even had the opportunity to perform with us a couple of times. Each time, I sat back and thought to myself, “Man. He’s got a pretty quick wit. I wish he would stay.” In fact, there was rarely a moment during Chris’ absence, when Abe or Steve wouldn’t comment on how much they missed him and the grand times they had putting “The Formula” together. Although I was having fun with the rest of the comedy troupe, even I began to feel as if Chris’ presence was sorely missed… and I barely knew the guy. 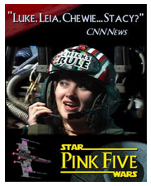 During those times when Chris Hanel came back, the two of us would always find time to chat about life, Comics In Action, The Formula, Trey Stokes, Pink Five, and Natalie Portman. The guy comes off as a true geek; one who has managed to do some things that even the ‘truest geek’ would bow down in reverence. How many people can actually say that they have met and interviewed George Takei of ‘Star Trek’ fame? Who has hung out with Natalie Portman? Chris has. Do you realize what this means? It means that I am within 3 degrees of separation from George ‘freakin’ Lucas. WOW! Do you know anyone who has met Mike Nelson, the head-writer for MS3K (Mystery Science Theater 3000)? I didn’t think so.

Somehow during those times, the two of us have garnered mutual respect for the other. We talk the same language. We both have high-hopes for Comics In Action and we both are upset George Lucas’ attempt to mask the original storyline…”Hahn shot first!” In addition, we know perfectly well that ‘Real Genius’ is the most quotable movie ever made.

So, now I look forward to Mr. Hanel returning for good to the heartland. He has already put together an idea that I’m sure will be a drop-dead hit. He’s already got me hook-line-and-sinker. I’m crossing my fingers that the honeymoon will last for some time. Actually, I should be ashamed for writing that. I know Chris. I know better than that.