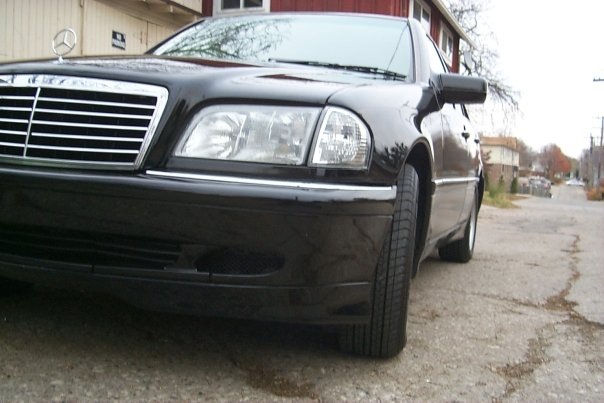 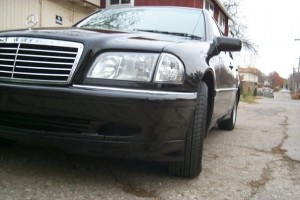 This all started some months ago when I began shopping for a car. My Cadillac (which I purchased from my parents) had died a horrible death last winter when a slow-leak in the radiator caused the engine to seize.

It would have cost too much to repair, so I junked it. So, I got by borrowing my folks 1989 Nissan Sentra which, by now, everyone knows I totaled in a rear-end collision with a semi-trailer last month. 🙁 The accident caused some of my friends to keep suggesting that I look for a European import rather than a Japanese vehicle. But, after a couple of used Honda Civic deals fell through, I decided to myself, “What could it hurt if I just looked.”

So, there I was staring at an online advertisement for a white 2000 Mercedes-Benz C230. It was being offered by DJ Auto in Cedar Rapids; just blocks away from my employer. They were asking $9700 for the car and it only had 67k miles on it. After some research and talking with my brother-in-law, Dan, I test drove the car and took it to a local import mechanic in Iowa City.

He found some mechanical problems needing attention before Winter set-in, so I was looking at putting another $1k into the car within months if I decided to purchase it. I made an offer of $7200 and the dealer balked at it. Even after an additional offer of $7500 almost a month later, the folks at DJ Auto refused to budge below $9k. Both times (following my brother-in-law’s advice) I simply walked away.

I widened my auto search to include Jaguars and BMWs. Unfortunately, Jaguar’s smallest engine is a 6-cylinder and I was looking for something better gas mileage. In addition, all the Beemers I saw had either too many miles or were too new. My next car purchase would have to meet some simple specifications:

Could this even be accomplished?

So, during last Friday’s lunch-break, I surfed again and found a black 1999 MB C230 Kompressor with only $60k miles. I freaked. It was located 6 hours away, just north of Indianapolis, IN. On a lark, I forwarded the link to my friend, Bill, and he really liked what I had found. He fired back a text-message asking when we were making the trip and I thought he was kidding.

That evening, Angie and I get together with Bill for some Japanese cuisine at our favorite sushi restaurant and again, Bill suggests we take a trip to Indiana to check-out the car. Still, I’m not taking him too seriously. Then later that night over a cup of coffee, he asks again, “So. When do we go? I’m not doing anything tomorrow.”

So, there we are; climbing into Bill’s Jaguar XJ6 at 6:30am Saturday morning. “You realize we’re crazy,” I yelled as I closed the door. Bill just shrugged his shoulders and smiled, “What are you gonna do?” The trip was awesome. Between bathroom breaks, Angie and I kept swapping places between the front and back seat and taking digital or 35mm pictures.

Bill drove the entire way. It was difficult getting him to let go of the steering wheel. I made additional last-minute telephone calls during the trip… just to make sure finances and insurance would OK. Even attempted to contact my father who lives just outside Indianapolis. I left a message for him on his cellphone; not realizing that he typically leaves the cellphone off during the weekends. Sorry, Pops.

We arrived at the dealership early that afternoon and promptly and promptly took the Mercedes out for a drive. Our initial inspection found a few problems: missing center-console cup holder, no owner’s manual, obvious repainting and replaced front bumper and grille. After the spin around the block we brought the C230 back and I offered the dealership $7,500 for the car. He paused, mentioned we were from out-of-town and replied, “Sure.” My jaw dropped. I had just driven six and a half hours and bought a Mercedes-Benz in Indianapolis. Wow.

Angie, Bill and I celebrated by having a quick dinner at a Turkish restaurant near downtown Indianapolis. The food was wonderful and the coffee was quite stiff. I’m not sure what I had for dinner. Whatever it was, it was pretty tasty.

The drive back to Iowa was a blur. We were exhausted but oddly giddy. It was as if Santa Claus had given us a peek at what we were getting for Christmas. Angie switched riding between Bill’s Jag and my newly acquired Mercedes each time we made a pit-stop. We took our time getting home. We had accomplished our task. There was no need rush back to Iowa City.

The rest is history. 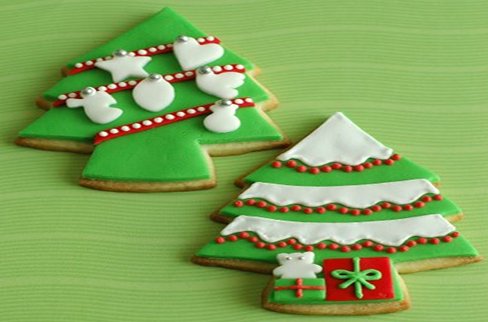