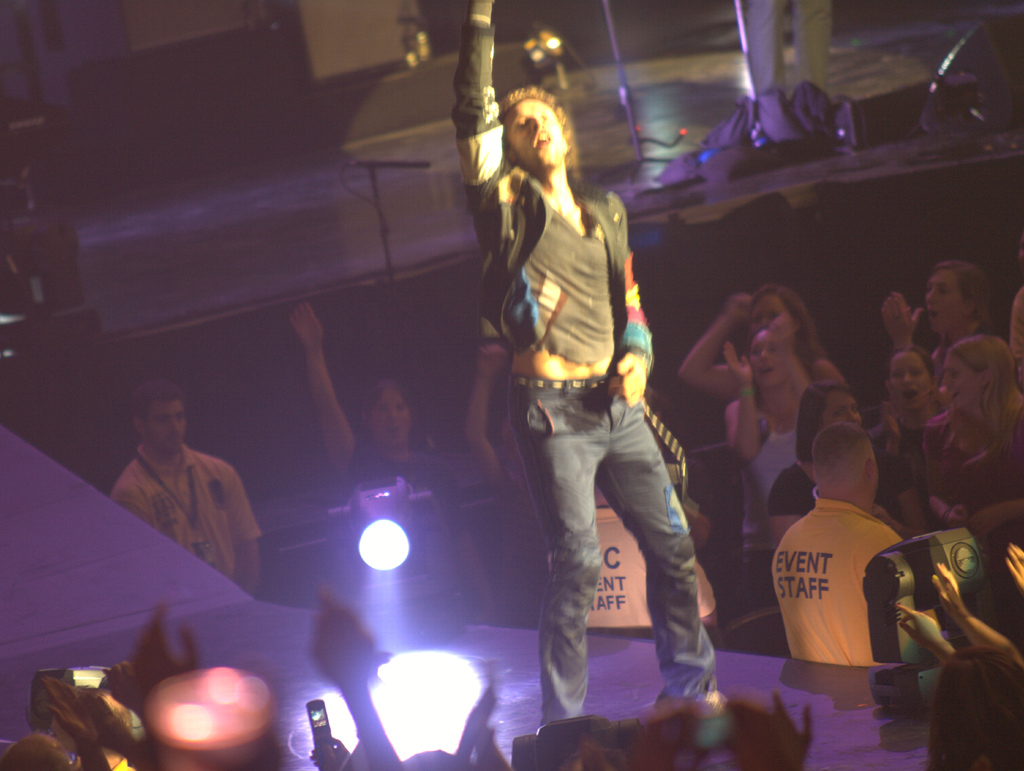 Shortly after it was announced that the Well Fargo Arena in Des Moines was hosting Coldplay on June 12, 2009… I purchased tickets on the first level balcony. Although I thought that the stage was to be right in front of me, I was just as jazzed with the seating when I realized they would be on the opposite side of the arena…cuz’…the seats were great.

The full story, however, is rather silly…and sweet.

With my kids here for the summer, it took some thinking to determine just when I would tell them about the concert. They are both big Coldplay fans. Especially since my daughter had already downloaded their freebie “LeftRightLeftRightLeft” LIVE album shortly after it was made available.

During one my evening talks with my son, Jared, I informed him of the Coldplay tickets and together… we schemed to keep the knowledge a secret. The day of the concert I took a half-day off from work and took Haley shopping for “something nice”. Of course, Haley wasn’t all-together into the shopping until 4 or 5 stores later. Finally, we wound a cute pink/orange dress and a grey tank-top. Then, we went to Atlas for an early evening dinner.

After a fulfilling meal of burritos, I handed a card to Haley. In a nutshell, it stated how much fun I had shopping with her and how apologetic I was that we did not get a chance to do that sort of thing more often. In the end, I mentioned that the evening was not finished and asked if she wanted to go to a concert tonight… in Des Moines.

She looked up at me and asked, “What concert?”. With the largest grin on my face possible, I slid the three tickets across the table and she picked them up. She stared at tickets for what seamed hours… and looked up at me and asked, “Are you serious? Are you kidding me? Honest?” With that, she stated, “Oh my god. I’m almost gonna’ cry,” and got up from the table and gave me a hug adding, “I’m gonna’ have to wear that dress.”

Duh. Why did you think we went shopping?

Of course, Coldplay was freakin’ awesome. The fact that I could hear them perform “Fix You” was BONUS enough. But, that is not the real point… never really was, to be perfectly honest. It’s been one hell of a year in the Lambing/Albers/Adkins family. It was nice to finally do something “out of the ordinary.” Something all three of us would enjoy. Something we’ll remember for some time to come.

What about the boy? Well, Jared knows all the words to every Coldplay tune known to man…but, we’ll just keep that between you and me. OK? Cool…and about how I got such stunning pictures? Well…that’s a story in of itself. 🙂