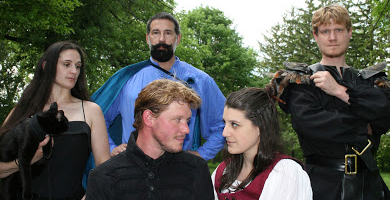 Before I get too far (and before the rain and weather cause Shakespeare to rise from the dead)… this is NOT a review of the Fourth Room Theatre “Cymbeline” production… it’s more of an assessment of the cast and crew… as a member of the crew. So, do NOT take my word for it… you must see this show for yourself and make your OWN judgement. 🙂

Honestly, it’s a good show… I mean… a REALLY good. Let’s start with the fact that Shakespeare’s “Cymbeline” is NOT the most respected Shakespeare play to date. It is not. It really isn’t. It’s received such a “bad name” that even George Bernard Shaw decided to re-write the last few scenes. So, let’s be honest… the play has got some serious “plot point” problems. 🙂

However, Fourth Room Theatre has chosen THIS particular W.S. play as their inaugural “Free Shakespeare” production… and they’ve been working this play to-the-bone. There is SO much good work being done in this show… that it is simply a “Must See” performance. It really is.

Cymbeline initially comes across as a “Hamlet” re-hash… but underneath… what we find is a Macbeth/Tempest/Hamlet/Romeo and Juliet/12th Night/Mid Summer’s Night Dream sort of production that (at the onset) can be really difficult to grasp. Yet, once the Prolog is finished… we know exactly how this play should “pan out”. Maybe. 🙂

Fourth Room understands that this play is… quirky. They understand that the play has some problems…. and they embrace those problems. And they work those issues… to great rewards! 🙂 And in the end… “Cymbeline” comes across as a comedy. And… it really is. It IS a comedy. Even with the exceptionally thought-out sword-play between “Iachimo”(SO well played by Matthew James) and “Posthumus”(K.M. Moore at is finest since Dreamwell’s ‘Henry V’)… this IS a comedy… at-it’s-heart. Question me? Just listen to the dialogue. 🙂

You will want to “Cheer” the heros… and “Boo” the villains. It is THAT awesome to watch. 🙂

It’s just a shame that (being outdoor theater) the current weather patterns have the possibility of putting a complete “Kabosh” on the rest of the performances this upcoming weekend (Thursday, May 30th… Friday, May 31st… Saturday, June 1st… NEW SHOW–Wednesday, May 29th). All of these show are scheduled for 7PM.

So, (Cross Your Fingers… the weather holds out)… bring snacks, wine, a blanket, chairs, and a LOT of “Deep Woods – Off”. You will NOT be sorry. 🙂

If you are looking for a more more insight, or a more adept review of Fourth Room Theatre’s “Cymbeline” production… head on over to the Theater Blog Spot site and see for yourself what others have had to say. 🙂

With MUCH luck… the show will continue to run (7PM):

All of these shows (despite the weather patterns) are slotted for the following outdoor address: