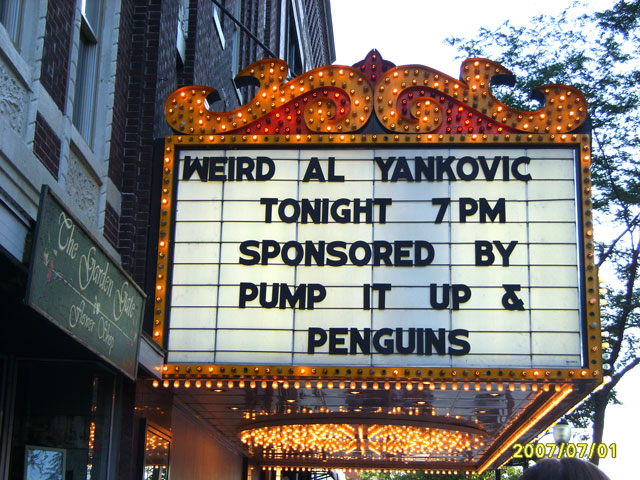 As old as I am, I have not attended as many concerts as I honestly should have. My first concert was at the Five Seasons Center where I watched Johnny Cash (aka The Man In Black) in the first row with my mom and step-father. I begged and pleaded with my mom who reluctantly allowed me to attend my second concert with my friends. White Snake was opening for Quiet Riot. I made out with a girl that night. It was awesome.

A Concert for Geeks

Now, both my kids are getting to that age where they too will be asking to attend concerts with their friends. The current favorites are Nickelback, Linkin Park, John Mayer and The Family Values tour. The trick is getting them involved in watching their favorite artists ‘LIVE’, but not so involved that it becomes dangerous. So, when the opportunity came to watch one of MY favorite artists, Weird Al Yankovic, how could I not resist the chance to take my kids to a concert that would be as exciting as it would be lame. I mean, Weird Al fans aren’t notorious boozers and drug fanatics. Simply put; they are geeks.

My kids have grown up with my fondness for Weird Al’s music. During every drive I have made while transporting my kids between Tennessee and Iowa, we listened to Weird Al’s latest CD at least once. It takes 10 hours to traverse that distance and I made that drive six to eight times a year. That’s a LOT of Weird Al. I may have to re-purchase ‘Running With Scissors’ as the surface has become so worn that the CD is nearly impossible to play.

He performed at the Paramount Theatre in Cedar Rapids and it marked the second time I had seen his ‘LIVE’ performance. As with the first, Sunday’s performance did not disappoint as Al and his crew played almost every song I could remember from his albums. Most of the night was spent listening to his latest hit albums; Running With Scissors and Straight Out Of Lynwood. Somehow I forgot about his Green Day parody, ‘Canadian Idiot’, which completely rocked the house.

Haley, Angie and I commented on how Weird Al never misses a good lyric. I don’t know how he does it. What surprised me the most, was his encore song. My kids have been rockin’ with me for years to the tune, “Albuquerque” and when Al’s band played the first bar, my mouth literally dropped. The song is SOOOOOOOOOOO long and the lyrics are eleven minutes of rambling. How ANYONE can remember that much dialog is amazing.

Still, the most disappointing aspect about the evening had nothing to do with the performance. My son, Jared, was in the middle of a school sponsored trip to Washington D. C., so he was not able to attend the show. I knew he was enjoying himself in the nation’s capitol, but his presence was sorely missed.

Haley took most of the pictures from that night. Every time I looked over at her, she had her eyes fixed upon the LCD on the back of her digital camera, bouncing back-and-forth and singing the lyrics along with Weird Al. The smile on her face was priceless.

It’s All About the Fandom

After the show, Angie, Haley and I waited for nearly an hour trying to get Weird Al’s autograph. I’ve never waited to get anyone’s autograph before. But, Angie insisted and we scampered to the back of the Paramount, giggling like a pack of teenagers. The mood was light and the fans were an eclectic bunch. They ranged from grade-schoolers to grandparents. Some had brought CD covers from home, while others (like us) didn’t think about an autograph until later. All we had were the show tickets that Angie had so elegantly procured in the first place. 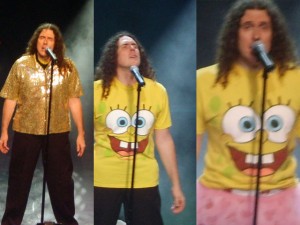 Angie mentioned that she had actually ran into Weird Al while she was living in New York. They bumped into each other, walking in opposite directions. It wasn’t until he had apologized for not watching where he was going, did Angie realize who she was standing face-to-face with. He continued walking down the street, leaving Angie a bit dumb-founded at the encounter. I can’t honestly think of what I would have done.

After nearly an hour, we were informed to form a line and told NOT to take any pictures. We hurried together and filed one-by-one past the entrance to Al’s tour bus. Weird Al appeared tired, as he sat in the steps to his bus. I handed him my ticket-stub, telling him, “Welcome back to Cedar Rapids.” Al commented back, “I’m trying to remember exactly when we were here last,” handing the freshly signed ticket back to me. I glanced at it and shook his hand. “Thanks for an awesome show”, I replied. He simply smiled back at me awkwardly. I was struck by how soft-spoken he was. It hit me afterwards that Al was just another guy. He’s just a guy that got lucky enough to do exactly what he wanted and make good money doing it.

I’m crossing my fingers that I get just as lucky. Wouldn’t that just be a hoot.

One thought on “White and Nerdy”